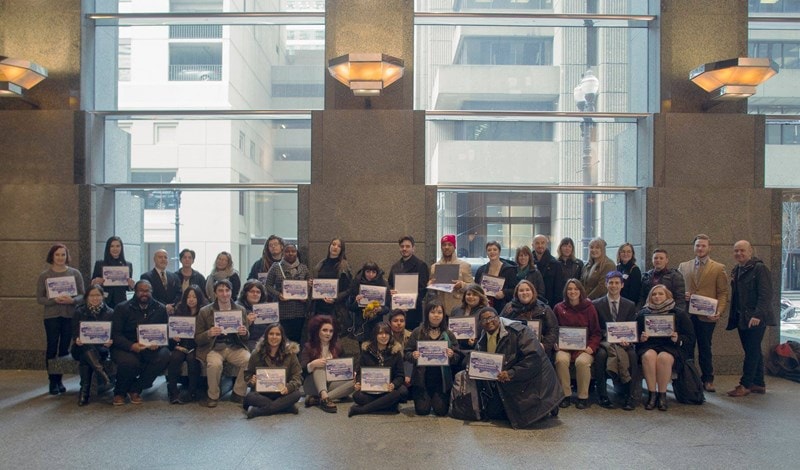 Three dozen American Academy of Art students participated last fall in a brand design competition sponsored by Chicago-based U.S. Cellular® that produced marketing campaign ideas for the company, and portfolio pieces and professional feedback for the students, along with scholarships toward tuition for a half-dozen of them who won first- and second-place finishes.

The first-place winners of the contest, exclusively available to Academy students, were a three-person team consisting of Diego Bartolo and twin sisters Michelle and Melissa Patino, all juniors, who were awarded $5,000 apiece. One two-person team and one individual tied for second place, with each person winning $3,000. These lucky winners included seniors Elise Gerstbauer and Natalie Basile, and junior Jade Green. U.S. Cellular awarded a total of $24,000 to the Academy students.

In January, all participants received a certificate and were invited to attend a lunch and tour of Leo Burnett, at which time awards were presented. The event provided terrific networking opportunities and a window into the sort of agency students might work at upon their graduation.

“There are not many opportunities out there where one can enter a contest sponsored by such a well-known company,” said Michelle Patino, an Oak Forest, Illinois native who will receive a bachelor of fine arts in digital illustration in April 2019. “The experience of creating an entire campaign aimed at Millennials sounded like a ton of fun, too, not to mention the chance to win scholarship money.” The contest was challenging, she added, but she and her teammates “really enjoyed working together to come up with a consistent style and idea.”

Basile, who hails from New Berlin, Wisconsin, and will receive a bachelor’s in fine arts in illustration in April 2018, said she was thrilled to finish second. “It’s been a month, and I’m still in shock that we won! I went in expecting just a participation award to not get my hopes too high,” she said. “I wanted to gain some valuable experience with professional companies and jobs because I’ll be graduating soon, so it would be very helpful. The prize money was a nice incentive, as well.”

Primarily aimed at seniors and juniors focused on careers in advertising/design, the contest was judged by a panel comprised of representatives of U.S. Cellular, its agency of record Mullen-Lowe, and experiential events agency Marketing Werks. Thirty-five students participated with a total of 16 team submissions during the seven months the project transpired.

The spark for the contest came from 1985 Academy alumna Liz Devereaux, senior manager of creative services at U.S. Cellular. She and U.S. Cellular wanted to tap into the Millennial generation to see what young people think of the cellular industry. Devereaux saw her alma mater as a natural fit. This was the first time the company held a contest like this.

“We tried to think out of the box in our approach to secure ideas to reach a newer, younger audience,” Devereaux said. “We knew we wanted to target younger consumers but didn’t want to go through a standard focus group. We wanted to capture the truth of how people really feel, and what it important to them, without anyone being swayed by others in a group discussion. Historically, artists have captured feelings and truths through their work. We thought they would be a great, untapped source of that.”

Devereaux explained that the Academy was a great creative partner because she knew the quality of the program and students, the location in Chicago near U.S. Cellular headquarters, and it helped the company’s live its belief in giving back to the communities where its associates live and work.

“My education at the Academy helped me to build a great foundation for a career,” Devereaux said of her alma mater. “I learned how to truly work hard and to appreciate both my work, and the work of others. I actually had already earned a bachelor’s degree before I attended the Academy.”

“There is no comparison between how the Academy prepares you for a real job in the arts, vs. a university that gives you a general education with an art focus,” Devereaux added. “I had the privilege of learning from some great professional artists.”

Devereaux hatched the idea for the contest with Cristel Turner, senior director of brand communication, strategy and creative content at U.S. Cellular, and Rich Kryczka, illustration chair at the Academy. They brainstormed how a contest could be a fit for both parties, what was realistic, and how the logistics and timing would work. The U.S. Cellular team had a chance to review student portfolios and their work from previous contests.

“It was awesome in every regard,” Kryczka said, “This was a terrific opportunity to give our participating students real-world experience with real deadlines. U.S. Cellular was great to work with. I like that they reached out to a younger group of people, to get ideas from Millennials, for Millennials.” 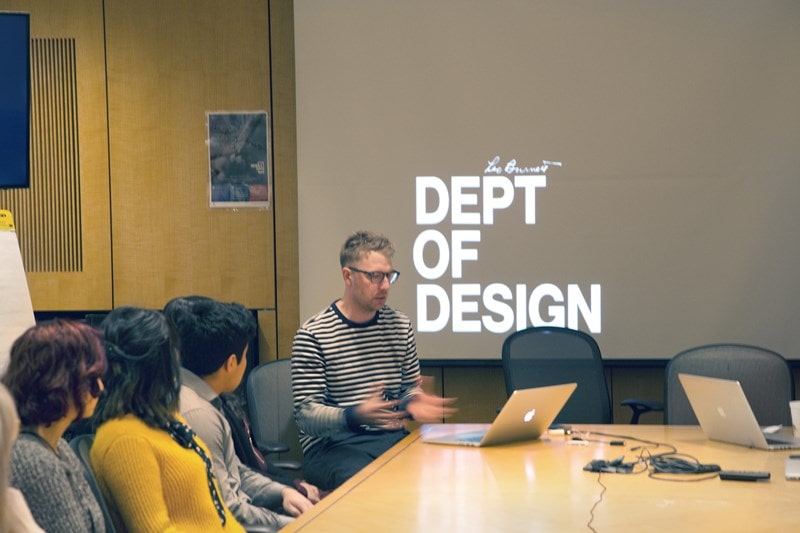 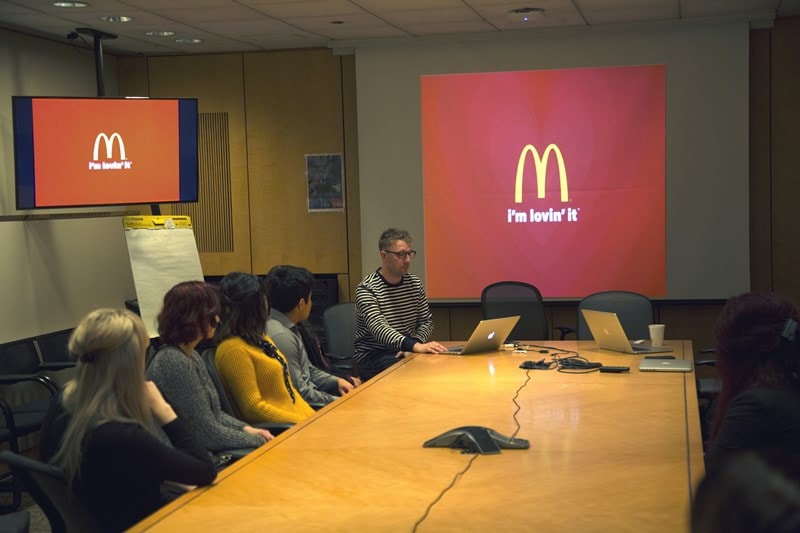 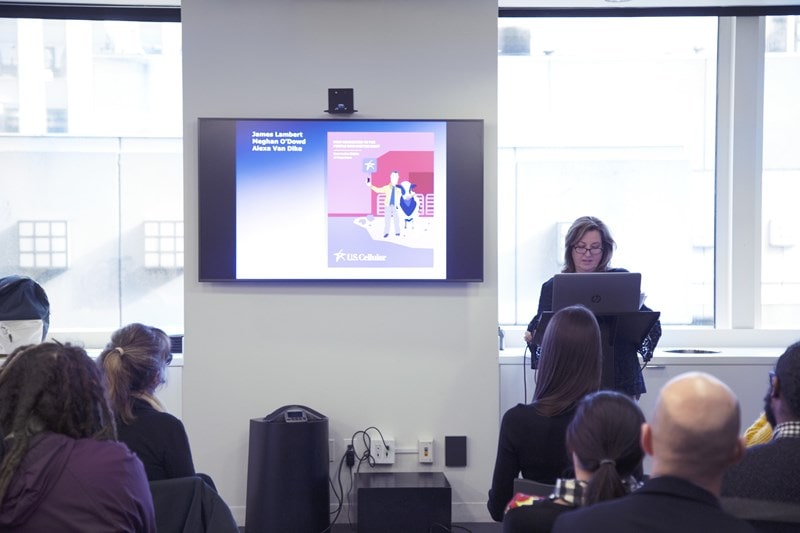 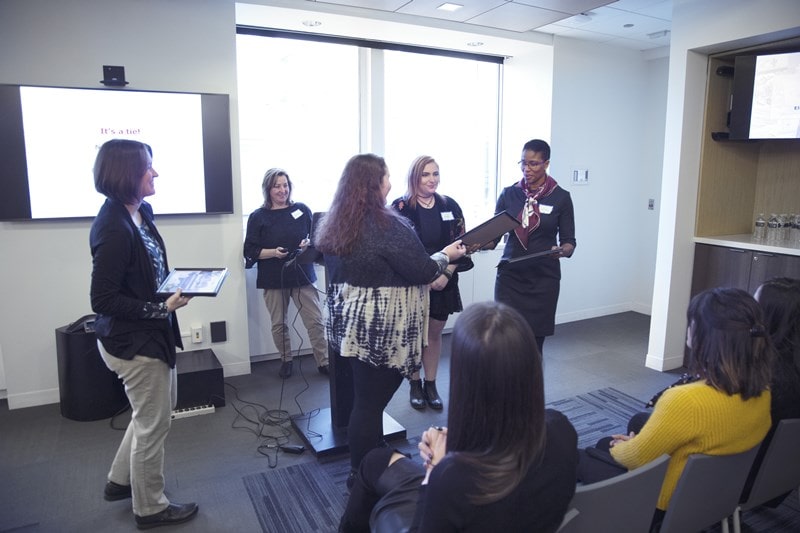 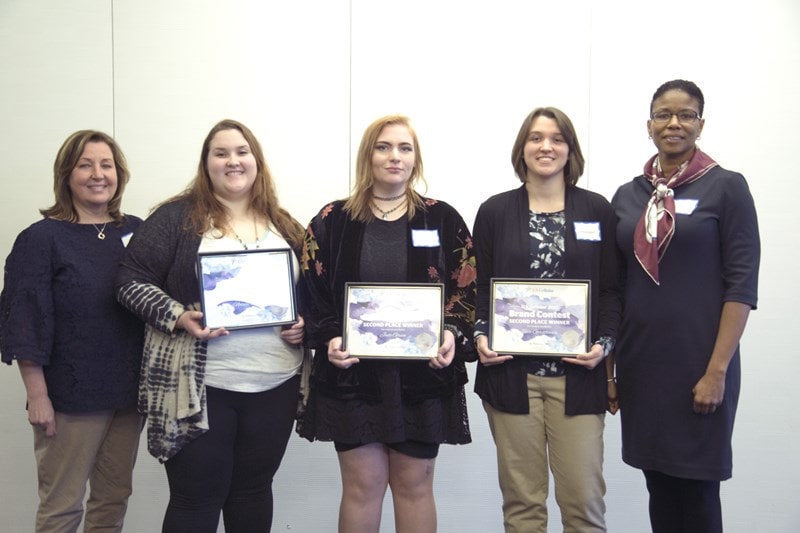 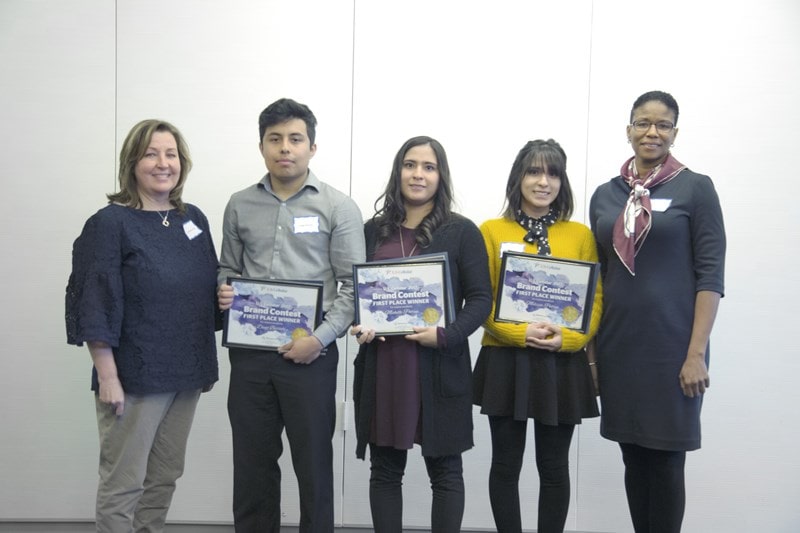 The contest asked students to bring to life the brand and network messaging by creating a kit of up to five elements that U.S. Cellular could use during its 2018 event season across the country. The company saw the contest as an opportunity to develop ideas and concepts. The student work will help with U.S. Cellular’s creative campaign development and execution, but will not be used in its exact form as an actual campaign.

The fifth-largest, full-service wireless carrier in the country, U.S. Cellular, as the company states, “provides national network coverage and industry-leading innovations designed to elevate the customer experience.” The company sponsors numerous local activities, which provides them with the chance to bring its brand to life, as it did in the summer of 2017 with the “Middle of Anywhere” campaign that emphasized the carrier’s policy of not charging hidden fees for signals that work “In the Middle of Anywhere®.”

The Academy students’ only restriction in creating a set of materials was that they had to use the company’s palette, logo and tone. Their packets needed to include mission statements and various campaign components, such as: social media; in-store displays; direct mail and flyers; and elements like videos, posters and palm cards for the events themselves.

Given that the campaign aimed to attract younger subscribers, ages 18 to 34, students were asked to think of themselves and their peers as the target. They were instructed to ask themselves what would make them consider U.S. Cellular as their carrier of choice, and what visual, message or offer would help sell them on the company.

They were asked to script a positive, straight-from-the-heart message and friendly, personality-filled visuals – photography, illustration or typography – that would help attract them to the brand. They were also asked to provide a short explanation of their strategy and why they thought it would work.

From U.S. Cellular’s perspective, the contest was a win-win-win for the company and for the Academy and its students, Devereaux explained. “We wanted to make this a great opportunity for the students to gain real-world experience,” she said. “Not only would six students walk away with scholarships, but each would have a portfolio piece. The students received feedback from top agencies. In addition, Leo Burnett/ARC partnered with us by hosting the appreciation lunch, and giving the attending students a tour of the agency with short informational presentations from different departments. For students, that type of opportunity can be priceless.”

“Everything was great, especially the tour of Leo Burnett, the luncheon for all the participants and the awards ceremony,” Kryzcka added. “No one knew who the winners were, including me, until they announced them at Leo Burnett. It was great closure to a great project.

“Our students had an authentic work experience, and a chance to see a real Chicago agency. Everyone benefitted,” Kryzcka added. He stressed the idea to U.S. Cellular of students working collaboratively and each receiving an equal amount of prize money.

The student work reinforced U.S. Cellular’s previous research findings, Devereaux said. “It gave us insight into the Millennial mindset and can be used as a data point to help us make informed decisions,” she said. “Research is important, and you can never do too much. That is important for the students to learn, as well. The more informed you are about targets, competition and trends, the better results you get in creating your campaign and its effectiveness. It is not just about creating pretty pictures. Your work has to tell a story, be memorable and drive consumers to purchase.”

Basile said she got more than she expected out of the competition. “The whole experience enabled me to gain valuable experience, an impressive addition to my resume, money toward my education, and validation of being an accomplished illustrator,” she said. “The tour and lunch that U.S. Cellular provided for us at Leo Burnett at the end was also terrific. Overall, from start to finish, this was a realistic, professional competition that was beneficial in many ways to me and all of us who participated.”

Michelle Patino said she and her teammates were surprised and “beyond happy” when they found out they had won. “It completely made all the sleepless nights worth it,” she said. “Not to mention the fact that we could profile this work and our win in our portfolios and resumes. More than anything, we are grateful for the experience we gained. Also, the scholarship amount was a real bonus. Winning the competition opened our eyes to the marketing side of the art world.”